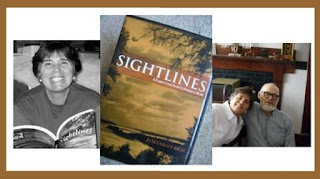 Janet Grace Riehl is an all-around creative WOOFer having made the rounds of every discipline in the arts: writing, visual art, music, acting/storytelling, and dance. Since 2006 her work has mainly focused on writing and publishing. Her most recent project is "Sightlines: A Family Love Story in Poetry and Song" that extends the written work in "Sightlines: A Poet's Diary" into the realm of sound.


ELDER POWER LOVES COLLABORATION:
Janet Grace Riehl’s Village Supported Her Dreams Publishing a book! That was the dream I pursued all my life and in my 50s, I made it a reality. A few years later at 60, I expanded the print version into an audio book. It took bliss, yes—that is to say, it took vision and passion. It took effort, yes…old-fashioned sweat, guts, and tears. And perhaps most importantly, it took a village; yes, a team of collaborators. It was the village that made it possible to see “Sightlines: A Poet’s Diary” into print in 2006 and in 2009, produce “Sightlines: A Family Love Story in Poetry and Music” in a 4-CD album -

For the book I was mainly on my own, but I had a mentor by my side only an email away. When I needed something, amazingly, a friend would appear at my doorstep--if only for 15 minutes--to help me.

For the audio book, my team expanded to include my father; a blogging buddy, who led me to her son-in-law, who became the sound-cum project manager; my legal guy for licensing and copyrights; a poet friend and blogging buddy who read the intro…and now the 20 bloggers helping with this Internet tour. I was the team leader, but what a team! They smoothed the way and kept me from falling into the ruts I hadn’t realized were in the road.
Why is collaboration a natural tool for Elders?

• We are often not as arrogant (or as blissfully ignorant?) as we once were and more open to working with others. It allows us to blend strengths and offset weaknesses so that we don’t have to learn whole new set of skills.

• Knowing that we can count on others relieves some of the pressure and makes our dreams seem achievable.

No matter what your dream is, know that you can achieve it if you don’t hesitate to use your Elder Power to call your collaborative village to your side. It can be as close as your kitchen table or your Internet connection.

Thanks, Janet for giving us your secret of Elder Power, or as we say around here, WOOFer Power!

As a bonus, if readers click here (this will take you to the top post on Riehlife) and comment on the video, they'll be eligible to be chosen in a contest raffle.

In addition, click on this link, http://www.riehlife.com to sign up for a 10-minute audio download of poetry and music from our new audio book, "Sightlines: A Family Love Story in Poetry and Music."

Posted by Mary Cunningham at 12:05 AM

I'm so happy to learn more about Janet. And I love her thoughts about Elder Power!

Couldn't agree more that this phase of life is about balance ... between loving ourselves and letting others in...to help us, to nurture us, to love us, too.

Thanks, Janet, for stopping by WOOFers Club on your tour!

I appreciate Janet's insights on collaboration. Too often I have tried to go it alone, but find that help and advice from friends and peers have made my dreams possible.

JGR's statement, 'It allows us to blend strengths and offset weaknesses so that we don’t have to learn whole new set of skills." is so true, and an important lesson to keep in mind.

Your words give us all power, Janet. I'm so in awe of what you've accomplished, along with your amazing dad!

Thanks Mary, Diana, and a sister member of The Janet Club.

I was in Ghana when I turned 60 December 2008. There an elder occupies an honored role in the culture. So, there couldn't have been a better place to launch into my next decade.

That's when I started thinking about Elder Power and changing my head and heart about aging.

What a wonderful experience, Janet! Your post as certainly been an inspiration on WOOF!

Janet,
Each time we allow a door to open, the guests come in and bring with them their skills, love, challenges and talent. It takes aging and mellowing, I think, for us to be brave enough to open those doors...and our inner door of acceptance.
Thanks for sharing your learn-ed wisdom! Arletta

I love your concept of WOOF...new to me but so wonderful. Especially, the idea of Elder Power and how when we mature we are more open to letting ourselves get the help we need as well as helping others.

I agree with everyone who's commented. Elder power rocks, or if you use its synonym, "WOOF," it howls! 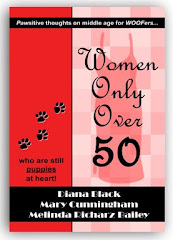 Women With A New Leash On Life!

January 2010 Interview on Feisty Side of Fifty

Email us today and set up 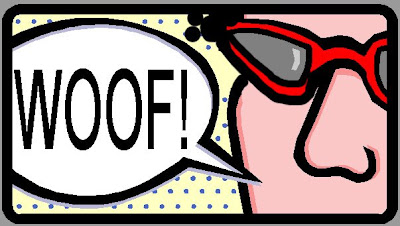 We'd love to speak to your book club or women's group!
Email us today to set a date! 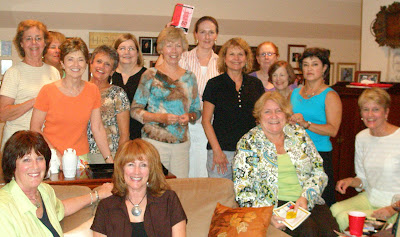 Never too old for something YOU!

Interview with d.d. dawg & Milkbone on... 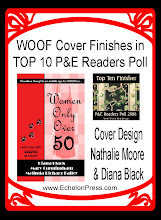 "You have to start by changing the story you tell yourself about getting older...The minute you say to yourself, 'Time is everything, and I'm going to make sure that time is used the way I dream it should be used,' then you've got a whole different story."—Diane Sawyer

"Beauty is how you feel inside, and it reflects in your eyes. It is not something physical." —Sophia Loren

A WOOFer on Top of the World!

Check out our newest Woofer!

Article on d.d.dawg & Milkbone in
The Corydon Democrat

The Dog Daze of Summer...

Two WOOFers having too much fun! 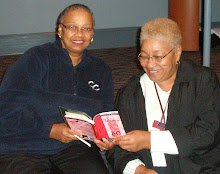 "A howl a day keeps
the scowl away!"